(Important: Play the downloadable version for much better framerate, better stability, as the HTML5 version is prone to crash and somehow fails at the last brawl zone)

Dere Dress Alice is an unfinished prototype released for the Fragment Jam. This means it's incomplete and is full of bugs and possible crashes (especially on HTML5).

It's a Beat-em-Up where you can alter your size at any point in time (assuming there's space, check the radar) and you fight against the forces of Neo Wonder (it's Wonderland). Try to get a high score by destroying foes, windows, cars in quick succession!

Year 2001. For far too long, Storm England was fighting a secret battle underground against Neo Wonder, a huge secret empire filled with strange monsters. Worn out by the war, the King of Storm Engulor abdicated, and the General of Neo Wonder, codenamed "Acid Ace", took the throne. The people hoped for peace under enemy control, but the truth was far worse.

Every day, the Neo Wonderlims, citizens of Neo Wonder, pillaged the sacred land of Storm Engulor, demolished buildings, attacked humans, cut all connections to the Internet, and burned their books: but more specifically, they were burning "Alice in Wonderland" books.

But the Engulorians had enough. Searching for a way to defeat the Neo Wonderlims, months of hidden research gave a fruitless result, but after a researcher read through one of the last copies of "Alice in Wonderland", a hidden secret code was located in the words. In the capital city of Lyndun, a secret team assembled the fruit of the this secret code: an outfit capable of changing the shape of the wearer. But it was a prototype, and the Neo Wonderlims eventually found their lair, killing all the researchers, and burning the outfit to a crisp.

Angered by the discovery that the humans are trying to fight back, "Acid Ace" sent out his army of Domino Soldiers, Kepler Aliens, and Lightbulb Parasols to eradicate the human race. Along the general was his three Majors: "Phenomenal Fang", "Planetary Daughter", and "Pyrotechnical Bang".

While in the metro, a school girl, dazzed by her own music player, got hit by a flying piece of burning fabric, destroying the entire train and it's users. The fabric was the key part of the secret outfit, and transformed the injured girl into the only one who can save Storm Engulor: Alice!

With the new outfit, Alice can grow and shrink, allowing her to traverse obstacles no ordinary human can traverse, and handle hordes of foes without breaking a sweat. But she'll need to be careful, as being big doesn't make you invincible, and you're a slow, big target. The dress also allows Alice to shoot dangerous sparks when she's normal sized.

It's a fragment. I tried to add keybind explanations, but some mechanics might not make sense since there are no tutorials. Read this if you need help:

Dude! I have An awesome time Playing this game! I like how little cute Alice can turn into a giant and can smash those cars & windows! :D

I hope you won't mind if I upload my gameplay at my Youtube channel. I want to share it with my friends and to everyone else!

Very nice game! I wish I'd read you description before playing as I was very confused of the controls and what they do. But that in itself felt like a part of the challenge. I love the art style of the game and the inspiration is clearly from Alice in Wonderland. I liked the story behind it and it was nice to read it, maybe you could implement it into the game, for example, in the menu or something? :)

I don't know if you've heard of Game Development World Championship before (gdwc2019) but it's a competition for indie game developers where they can submit their games and it's free! It's great if you want some more visibility for the game and it only takes a couple of minutes to join :)

This game look like very insteresting weird. A Beat-em Up based of the Lewis Carol's classic book (Alice in the Wonderland). She is more fighter than the original, with several powers, including the giant form, that quadruply its size (it will measure 5 or 6 meters?) shows to be a tank with destructive potential, something that once was a nuisance that gave many problems (especially inside a house):

In addition to that you need to correct several bugs and errors, also makes him lack put more references to the classic story, as the White Rabbit, the mad Hatter, the Blue Worm with hookah, the Smiling Cat, or the Queen of Hearts if was the final boss, etc. 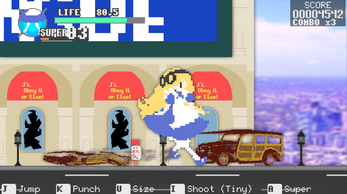 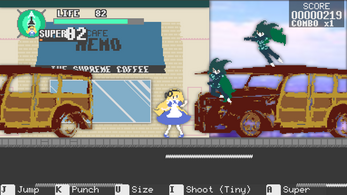 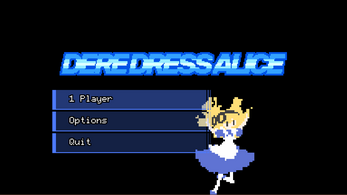 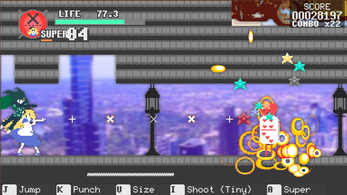 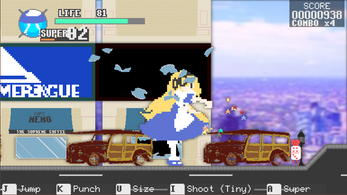